skip to main | skip to sidebar

Here's a peak of a portion of my Jewish themed rubber stamp collection... If you'd like to know what a particular stamp is let me know in comments and I can reply if I have the information so you can track it down 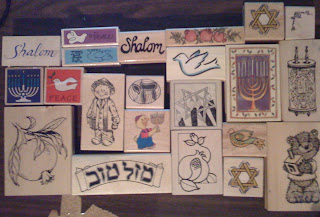 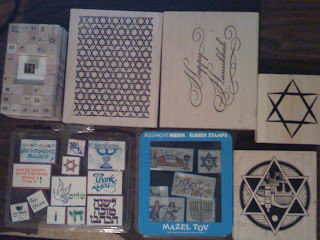 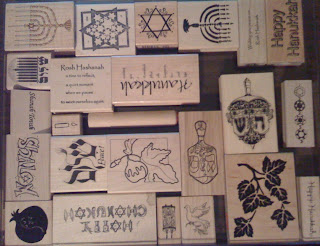 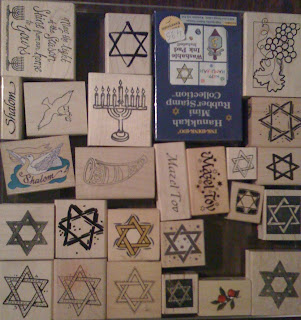 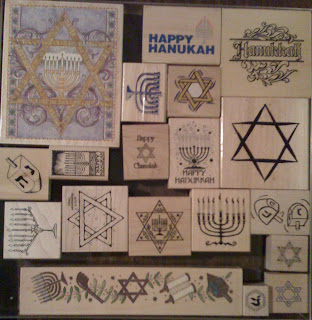 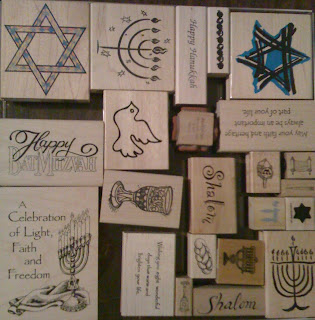 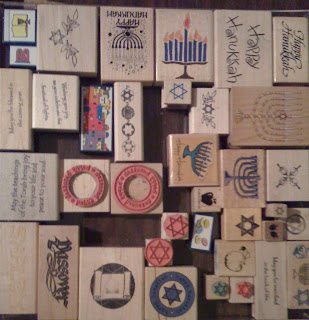 Well, technically I bought 3 stamps, but they are all the same design.

This stamp was one of the $1.00 stamps by Studio G bought from Michaels.

This is not the first stamp that I have done this to, so I'll post the rest later for ideas.

What I did is left the first original stamp untouched, and cut apart the other 2 leaving me with a total of 5 stamps (I could have 6 if I wanted the outer circle).

This allows me to freely stamp without having to mask! All for $3.00.

How's that for Jewish stamping on a budget :) 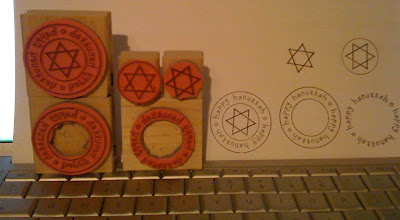 This is another time of year that cards are given, but probably not as frequently as you think.

Hanukkah, the Jewish festival of re-dedication, also known as the festival of lights, is an eight day festival beginning on the 25th day of the Jewish month of Kislev (which means that it is NOT on the same day every year and it doesn't always happen close to Christmas - make sure to check your calendars).

Hanukkah also can be spelled in many ways. Don't be afraid that you've misspelled it...

No matter how you spell it, Hanukkah traditions stay the same.

It is also known as:

Hanukkah is probably the best known Jewish holiday because of its proximity to Christmas. Many non-Jews (and Jews too) think of this holiday as the "Jewish Christmas" and have adopted many of the Christmas customs, such as elaborate gift-giving and decoration. It is bitterly ironic that this holiday, which has its roots in a revolution against assimilation and the suppression of Jewish religion, has become the most assimilated, secular holiday on our calendar.

The only true symbol of this holiday is the lighting of the Menorah. The candles are set in a Hanukiyah, better known as a Menorah, which is the Hebrew word meaning "candelabra." A Hanukiyah has nine candles: one for each night, plus a shamus (servant) at a different height to symbolize the difference from the other candles. (This is a nice note if you are stamping cards with candle stamps - you would stamp 9 total and shift one at a different height). The menorah is usually placed outside of the doorway on the left side (when entering) opposite the mezuzah. If this is not possible, it can be placed on a window sill facing a public street, providing the sill is not more than twenty-nine feet above street level (no point if you live in a high-rise and no one can see it right?). If neither of these are possible, the Menorah can be placed on a table inside the house.

Contrary to popular belief Hanukkah is not an important religious holiday. Hanukkah is not even mentioned in Jewish scripture as the story is related in the book of Maccabbees, which Jews do not accept as scripture.

Another tradition of Hanukkah is the Dreidel Game - dreidels are marked with four Hebrew letters: Nun, Gimmel, Hey and Shin. These letters stand for the Hebrew phrase "Nes Gadol Hayah Sham", which means "a great miracle happened there", referring to the miracle of the oil. (I'm sure you can find the story online if you wanted ) Most people play for matchsticks, pennies, M&Ms or chocolate coins - so there's a few ideas for your stamping. Dreidels were first used during the rule of Antiochus before the Maccabees' revolt. During this time, it was forbidden to study the Torah. Anyone studying the Torah would keep a dreidel handy and would then pull out a dreidel and pretend to be playing whenever soldiers investigated

Dreidel is played by placing coins (or some other object) into a pot. Then, each player spins the dreidel and one of four things happen, depending on what side the Driedel lands on:

Some ideas for stamping cards during the Hanukkah season:

No Jewish stamps? That's okay - a simple "Seasons Greetings" will do - trust me - you don't have to go out and buy a Jewish stamp set just because your new neighbors who moved in are Jewish. Just please no "Merry Christmas" - although it is appreciated by most.

Some sample sentiments are:

Some sample stamps and companies to get you started: 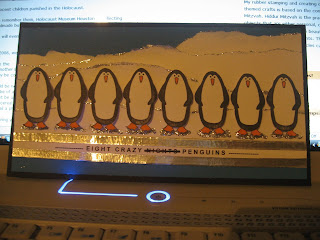 Trying for a little Jewish humor (and probably failing miserably) - introducing Eight Crazy Penguins. The inside of the card has an additional penguin resembling the Shamash candle. (Don't know what a Shamash is? Ready my Hanukkah Stamping Primer HERE)

I may eventually modify the penguin arms to hold a candle.. or maybe one of the penguins hold a menorah - but I have to find either a punch or stamp that would work...
Posted by ÷-[-shayla-]-÷ at 9:48 PM No comments:

1,500,000 innocent children parished in the Holocaust.

In an effort to remember them, Holocaust Museum Houston is collecting
1.5 million handmade butterflies.

The butterflies will eventually comprise a breath-taking exhibition, currently scheduled for Spring 2012, for all to remember.

Please facilitate the
“I Never Saw Another Butterfly” activity and create as many handmade arts-and-crafts butterflies as possible. This project may be completed by all ages as individuals or groups.

Butterflies should be no larger than 8 inches by 10 inches.
Butterflies may be of any medium the artist chooses, but two-dimensional submissions are preferred.
Glitter should not be used.
Food products (cereal, macaroni, candy, marshmallows or other perishables) also should not be used.
If possible, e-mail a photograph of your butterflies, to butterflyproject@hmh.org.

Please send or bring your butterflies to the Museum by June 30, 2011, with the following information included:

Your name,
Your organization or school,
Your address,
Your e-mail address, and
The total number of butterflies sent.

Mail or bring your butterflies to:

For questions or additional information, please e-mail butterflyproject@hmh.org.
Posted by ÷-[-shayla-]-÷ at 10:56 PM No comments: 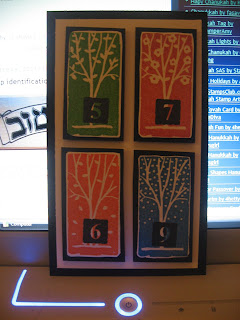 Ok... so I'm a little early to post this one.
Seasonal Tree stamps are from Whispers/Sugarloaf stamps (one of my favorite stamp companies that no longer exists - they are sort of Inque Boutique now but the original wood mount stamps are no more).

The numbers are also by Whispers/Sugaroaf Stamps. Inks are by CTMH. Another easy to make Hanukkah Card.

I used "Postage Stamp" stamp from All Night Media then I used an alphabet stamp set to stamp the letters. The Star of David is from an unknown stamp company. I used foam mount to make the stamps pop up a bit from the card.
Posted by ÷-[-shayla-]-÷ at 11:51 PM No comments:

This is for all Jewish themed cards that are hand crafted (stamped, drawn, painted or other).

Please join me by adding your cards to the group

Once there are new members, I'll post the flicker group here and rotate the images for everyone to see.
Posted by ÷-[-shayla-]-÷ at 8:24 PM No comments: 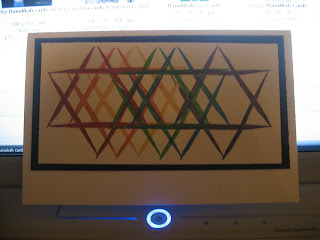 This is an all-occasion card I created using the standard rainbow colors. I stamped each image 1/2 inch apart from the next and bordered it in black cardstock. I left the bottom blank since I can quickly chose any random saying (like Mazel Tov, or L'Shana Tovah) and make up a quick card to give to someone. You could even use this style for a quick Happy Birthday card. 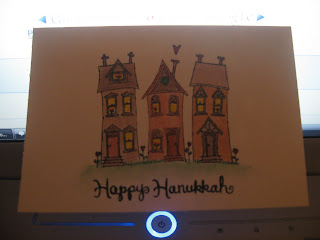 Another simple card to make. I used a stamp from Stampin Up's Right at Home set. Although my photography skills are lacking, I can assure you that in the windows are tiny hand drawn Chanukiahs that are lit.

My preference for modifying line drawn stamps like this is the Staedtler Pigment Liner 4 packs. It comes with a .3, .5, .7 and 1.0 sized pens. They are archival safe and acid free. They are also waterproof on paper which is the reason I use Stazon. I can blend and I don't get any smudged lines. 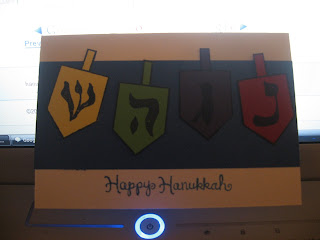 This was a very simple card to make. I used

It's that time of the season to make Hanukkah Cards again! I've got a list of wonderful cards listed below to spark your creativity from SplitCoast. I'll be posting mine soon - Enjoy!

I hope this is enough to get you started on your creative journey - please post and share a link to your designed Hanukah cards in the comments section. I would love to see them!
Posted by ÷-[-shayla-]-÷ at 1:08 PM No comments: 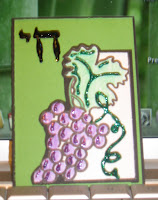 It certainly has been one busy year for me - sadly not all of it very good. But I have not forgotten about this blog and hope that going forward I can post more updates to it like I want. I've also added a sister blog that i'll post more about soon as well for my Jewish Polymer Clay art.

I have a few ATC's that I am planning on uploading soon as well as a few more cards I've done. So keep a look out on new posts coming soon.

I just want to say thank you to all my recent visitors - we've reached 1000 hits! 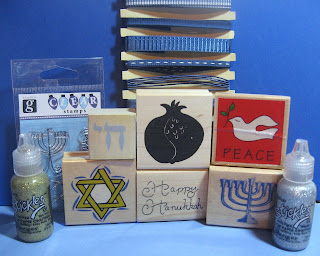 Lynn Anne - send me an email with you address and I'll get your package out in the next week. shayla dot anthony at gmail dot com.

Everyone else is doing it - so why not me?

I happen to have a stash of Jewish stamps that I have up for grabs during my blog candy challenge. My blog is pretty small still, and there aren't that many visitors yet. So I am going to pick a random date and comment from that date between now (December 2nd) and January 1st 2008 and that person will win my stash!

Leave a comment anywhere on this site under any post and your entered - just please make sure I have a way to reach you via the comment you have posted (if your login doesn't give me a way to reply to you).

I will give the person 15 days to claim that award if they are unreachable, and if not I will choose another winner.

How I'll decide... I thought about this ahead of time (and inquiring minds now want to know) - how to be fair and select someone really random. I have a 30 sided dice that I will be using to select the date. Since I posted on Dec 2nd and there are 31 days in December - the #1 on the dice will be for December 31st posts. Once the date is selected, then I will roll again for the comment on that blog date - no comments posted, then I will select another date, and continue until I have a winner.

÷-[-shayla-]-÷
My rubber stamping and creating of Jewish themed crafts is based on the concept of Hiddur Mitzvah. Hiddur Mitzvah is the practice of taking objects that are either personal, communal or ritual and making them more beautiful to glorify G*d and G*d's commandments. This is a "living" blog - which means the articles can change at any time.

A yahoogroups community to bring Jewish Stampers from all over the world together in a common forum.

This is a Flickr badge showing photos in a set called Jewish Cards. Make your own badge here.

Jewish Cards - links to get you started!

All content, including text, photographs and concept design elements are © Shayla Anthony. Content within this blog is shared for personal or non-commercial use and inspiration only unless asked for permission.